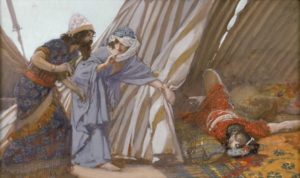 WE BEGIN our study of the second of the Historical Books of the Bible. Judges is named for the twelve leaders who were raised up by Yahweh at critical points in Israel’s history from the late 13th century to the mid-11th century B.C., and it chronicles Israel’s slide into apostasy and chaos, showing the need for a godly king to lead them.

Today, we look at the first five judges: Othniel, Ehud, Shamgar (who may have been a devotee of the Canaanite goddess of war), Barak, and Deborah.

We also discuss a few interesting aspects of the Song of Deborah (Judges 5), especially the curse by the Angel of Yahweh (Jesus, if you’ve just joined us) against Meroz. According to a Jewish tradition, Meroz was a group of supernatural inhabitants of the second heaven who refused to fight for Yahweh against the Canaanites.