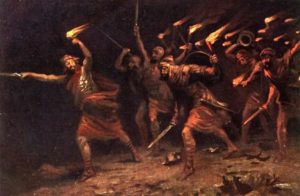 TODAY WE discuss a test of faith most of us hope we never experience: God, in the form of the Angel of Yahweh (another Old Testament Christophany), chose Gideon to lead Israel against the armies of Midian and Amalek, which had been oppressing the Israelites for seven years.  Then He ordered Gideon to send home more than 90% of the troops so that the forces of Israel were outnumbered 400-to-1 (instead of just 4-to-1).

We look at the rise and fall of Gideon’s son Abimelech (a name that means “my father is king”, a hint that Gideon’s pride may have gotten the better of him in later life), more minor judges, and the foolish vow of Jephthah.