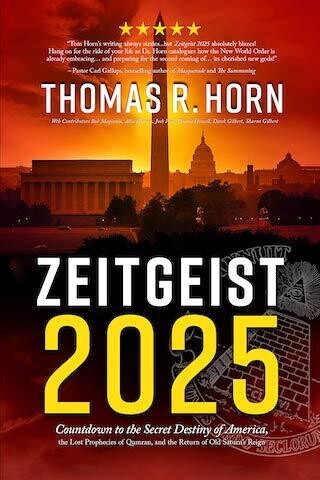 00028
$19.95
Countdown to the Secret Destiny of America: The Lost Prophecies of Qumran, and The Return of Old Saturn’s Reign
In stock
1
Product Details
Brand: Defender

Before and after the presidency of Donald Trump, the United States was―and now is again―on an intentional trajectory to fulfill what famous Freemason Manly P. Hall described as the Secret Destiny of America. Hall’s book includes future national and global subservience to the god of Freemasonry, a deity most Americans would not imagine when reciting the pledge of allegiance to “one nation under God.”

Unknown to most Americans and certainly many Christians is the fact that the Great Seal of the United States is a prophecy hidden in plain sight by the Founding Fathers for more than two hundred years, foretelling the return of this terrifying, demonic god who seizes control of Earth in the New Order of the Ages. This supernatural entity was known and feared in ancient times by different names: Apollo, Osiris, and even farther back as Nimrod, whom Masons consider to be the father of their institution.

Does ancient prophecy indicate he will return in 2025?

NOW, FOR THE FIRST TIME EVER, YOU WILL LEARN…AND MUCH MORE!