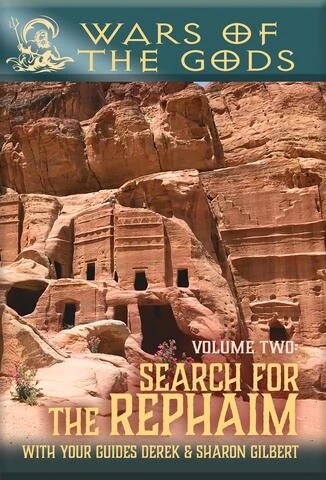 Wars of the Gods, Volume 2: Search for the Rephaim

The groundbreaking documentary Wars of the Gods Vol. 2: Search for the Rephaim takes you on an eye-opening tour of the Holy Land -- ground zero in the long war with the fallen realm.

SkyWatchTV's Derek and Sharon Gilbert take you to mysterious Gilgal Refaim, created for the veneration of the dead, and show you a jaw-dropping, previously unknown serpent-shaped mound covered with megalithic tombs that's far older and larger than the Great Serpent Mound in Ohio!

The Gilberts lead you to the altar of Joshua, through the tunnels beneath Jerusalem's Old City, show you the real locations of the Crucifixion and burial tomb of Jesus, and then up to the Temple Mount, where the final battle of the ages will be fought -- Armageddon.

They also take you to Mount Nebo overlooking the ancient plains of Moab and show you the site of biblical Sodom. They explain Sodom's connection to the veneration of the Rephaim that brought disaster on Israel, and how it connects to Ezekiel's end times prophecy of the war of Gog and Magog.

Finally, they take you on a one-of-a-kind tour of Petra to show you the forgotten, original location of Islam's most sacred relic.

This two-hour tour of the Israel, with special guests Pastor Carl Gallups and messianic Rabbi Zev Porat, will open your eyes to the physical, historical reality of the supernatural war that's been ongoing since Eden.