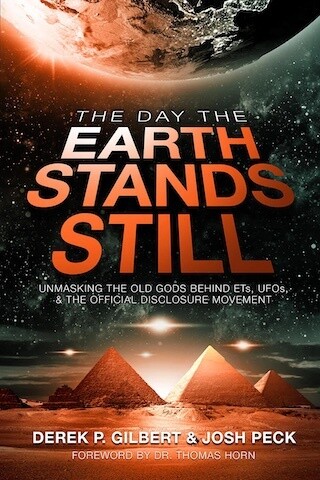 The Day the Earth Stands Still

What if the modern push for official disclosure concerning ETI and UFOs is actually an ancient effort? What if this conspiracy can be traced back to the old gods, fallen elohim, who rebelled against their Creator long ago? What if they're planning one final attempt to take control of our planet? Are they evil, or are they benevolent beings offering their assistance? And if they are returning, is it possible to pinpoint the exact date of official disclosure?

Noted researchers and authors Josh Peck (Abaddon Ascending, Unraveling the Multiverse) and Derek P. Gilbert (The Great Inception, Last Clash of the Titans) team up to expose the disturbing truth behind the push for official disclosure.

Learn what the Podesta WikiLeaks revealed about those controlling this movement. Discover the identities of the otherworldly beings pulling the strings from the shadows. Determine for yourself, finally, if evangelical Christianity could be compatible with genuine extraterrestrials (the answer might not be what you think). For the first time ever, Gilbert and Peck disclose the reality behind these age-old questions.

And much more! Buy the Kindle edition at Amazon.
Save this product for later
Display prices in: USD
2022-03-10