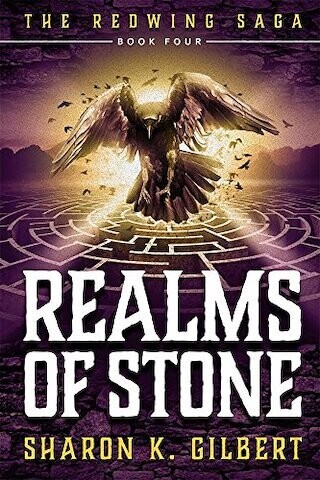 Realms of Stone: Book Four of The Redwing Saga

Having suffered a nearly fatal head wound, Charles Sinclair has awoken in a nightmarish landscape of living stones and sentient trees, where demonic ravens watch his every move, ready for an easy meal. His only hope of escape is to traverse a treacherous maze of seven concentric rings, each with seven possible entries. His guide through this underworld labyrinth is a nameless birdman, who informs the desperate marquess that a refuge lies at the centre of the maze-if he can only reach it.

Following her escape from the fire, Elizabeth Sinclair has been taken to Anatole's castle on the western edge of London, but now suffers from pneumonia. Romanov summons the aid of Dr. Henry MacAlpin, a Scottish physician who had been able to perceive the realm of the unseen since his childhood.

Elsewhere, in London, someone is murdering Redwing's most prominent members, leaving occult signatures at every blood-spattered scene. The inner circle must solve this series of crimes to prevent Raziel Grigor from activating a subterranean portal and releasing the next of his Watcher companions. The clues to success rest within a hidden room inside Haimsbury House, but the information is in a complex cipher that defies decryption.

Will Beth and Charles reunite? What part will Anatole Romanov play in their lives from this moment forward? Lorena MacKey knows the answer, but will Paul Stuart believe her? The clock is ticking, and the faith of every member will be tested in this next phase of Redwing's master plan.