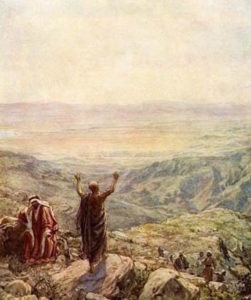 HOW CAN one curse whom God has not cursed? Today we learn about a unique person in the Bible, an acknowledged prophet who apparently didn’t always get his messages from Yahweh.

Unlike other Old Testament prophets, Balaam son of Beor was a prophet for profit. The frightened king of Moab, Balak son of Zippor, hired Balaam to curse Israel so that his tiny nation would not be overrun. Instead, Balaam blessed Israel three times because, as he told Balak, “All that Yahweh says, that I must do.”

Well, yeah. About that… More next week. (Click here and here for more on the Deir Alla inscription, which preserves another prophecy of Balaam’s — but one definitely not from Yahweh.)

We also discuss the bizarre incident in the desert with the fiery serpents (saraph nachash, Numbers 21:6) and the Israelites’ defeat of the giant Rephaim kings of the Amorites, Sihon of Heshbon and Og of Bashan.